I have a sculpture background which is one of those things that both helps and hinders when working in sugar. On one hand it shortens the learning curve when doing really unusual projects that fall far out side the realm of baking, but it can get me into trouble, too. There are lots of things that work with non-food construction that simply do not translate due to the turbulent nature of food as an art medium. That said, we do some pretty outlandish things here!

First up are a couple of complex, semi-realistic figures based on actual people. This lovely birthday girl had a thing for mermaids and glitter, so I sculpted her based on photos provided by her boyfriend. The tail was added wet on the cake. While I usually like to have the figure completed well before it goes on the cake, sometimes it's just not possible and things have to be added the day of. The tail had to conform to the shape of the cake (a rock surrounded by sea) and I simply couldn't anticipate how and where she would sit best. She's made of gum paste, which I prefer over modeling chocolate for the base reason that the dried surface resembles porcelain, paints well, and can be shaded smooth if needed. 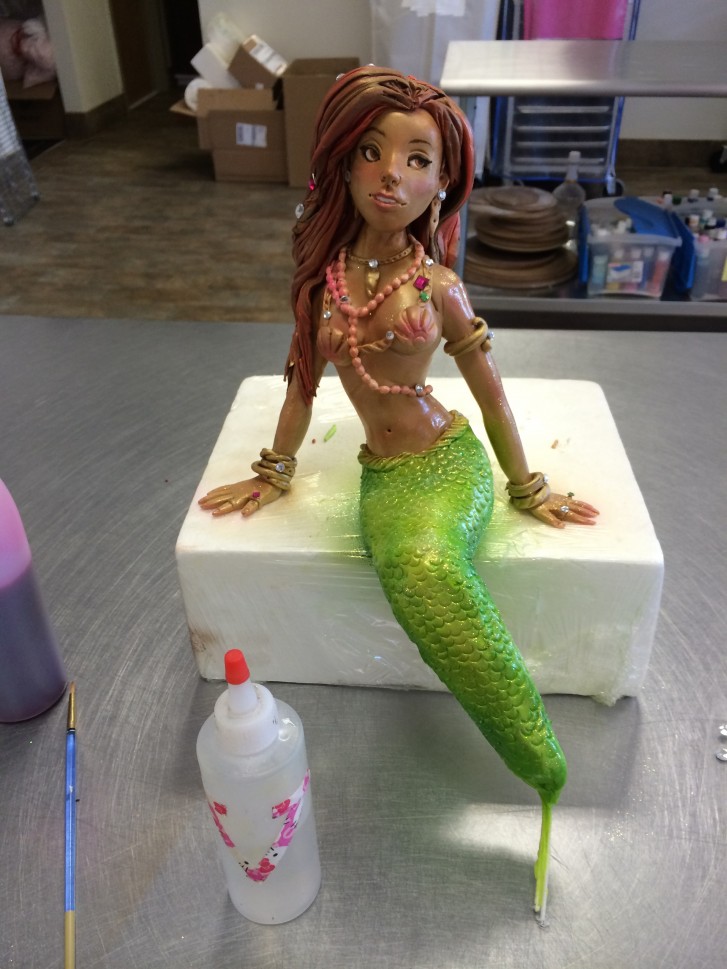 Staying on that theme, we were asked by BBC America to create a cake commemorating 50 years of the iconic British television show Doctor Who. Actor Matt Smith was the current star at the time and I had to create him in sugar exiting the Tardis. It was a real challenge! As you can see above, I usually avoid portraiture and go for a detailed, flattering character or cartoon look. It's less likely to suffer "uncanny valley" effect and also less likely to make me terribly frustrated as sculpting a realistic portrait is hard enough in clay, much less attempting it with the limitations of sugar, deadlines, etc.

My first attempt actually failed. I misread the dimensions of the finished cake and had to start all over. For a brief time my desk featured Doctor Who and his Mini-me companion. 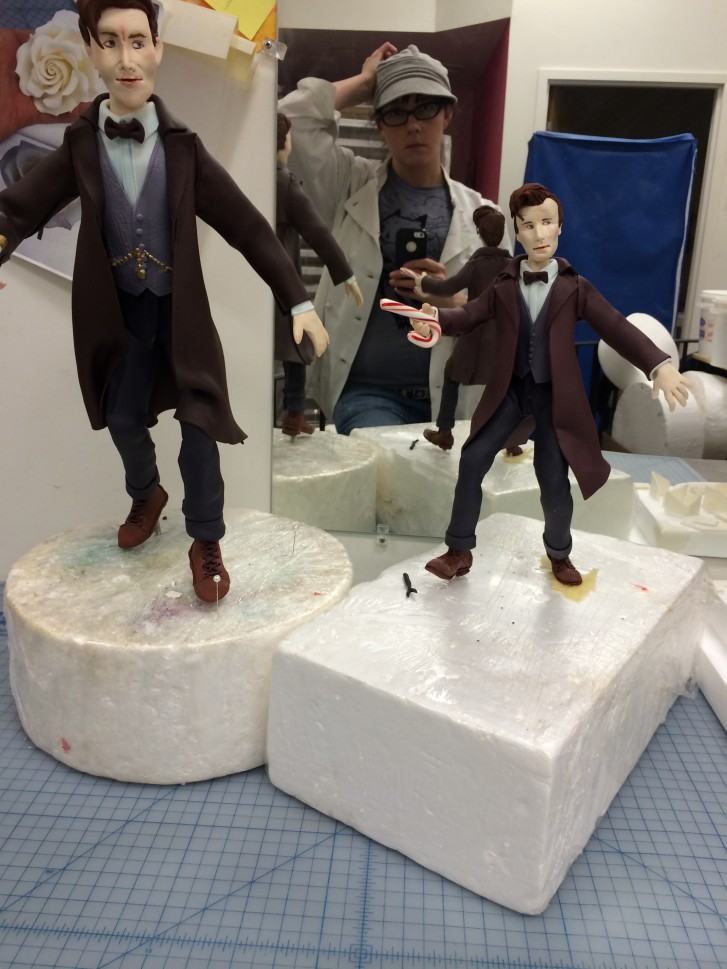 It was OK in the long run. The second attempt (the taller one) had a better likeness. While I certainly went more realistic on this one in comparison to the mermaid above, you can see I stayed in a comic book style still. The finished cake lit up, too.

While all this may seem very complex, Matt Smith was replicated in sugar using much the same methods taught in Anne's Figure Modeling Craftsy Class. From simple to complex, the bones of the structure stay the same. 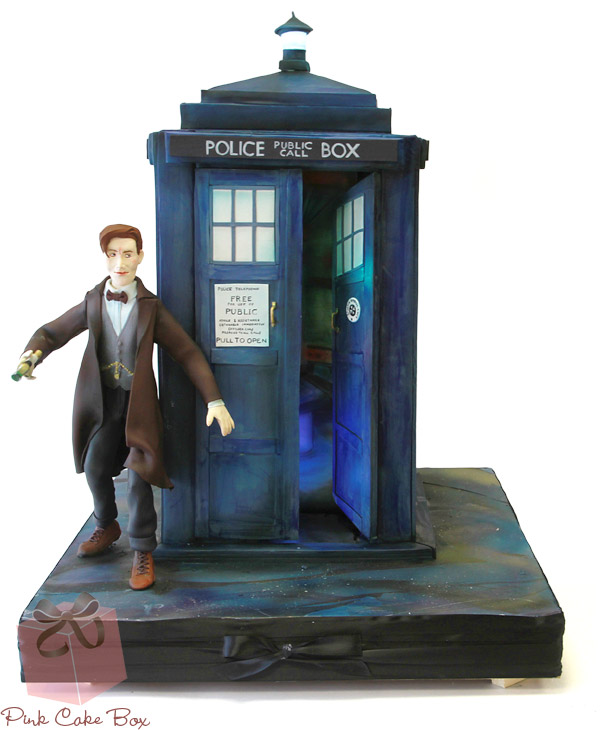 When my coworker Nicole had her Rock n' Roll themed wedding recently, I again had the opportunity to work in that murky area between portrait and caricature. This held other challenges as it was a precarious totem pole design, or "stack of heads" as I cheerfully dubbed it in the early stages. The band Kiss is a favorite of the groom, and I made the underlying structure of this particular piece faux so it could be preserved for posterity as part of his formidable memorabilia collection. 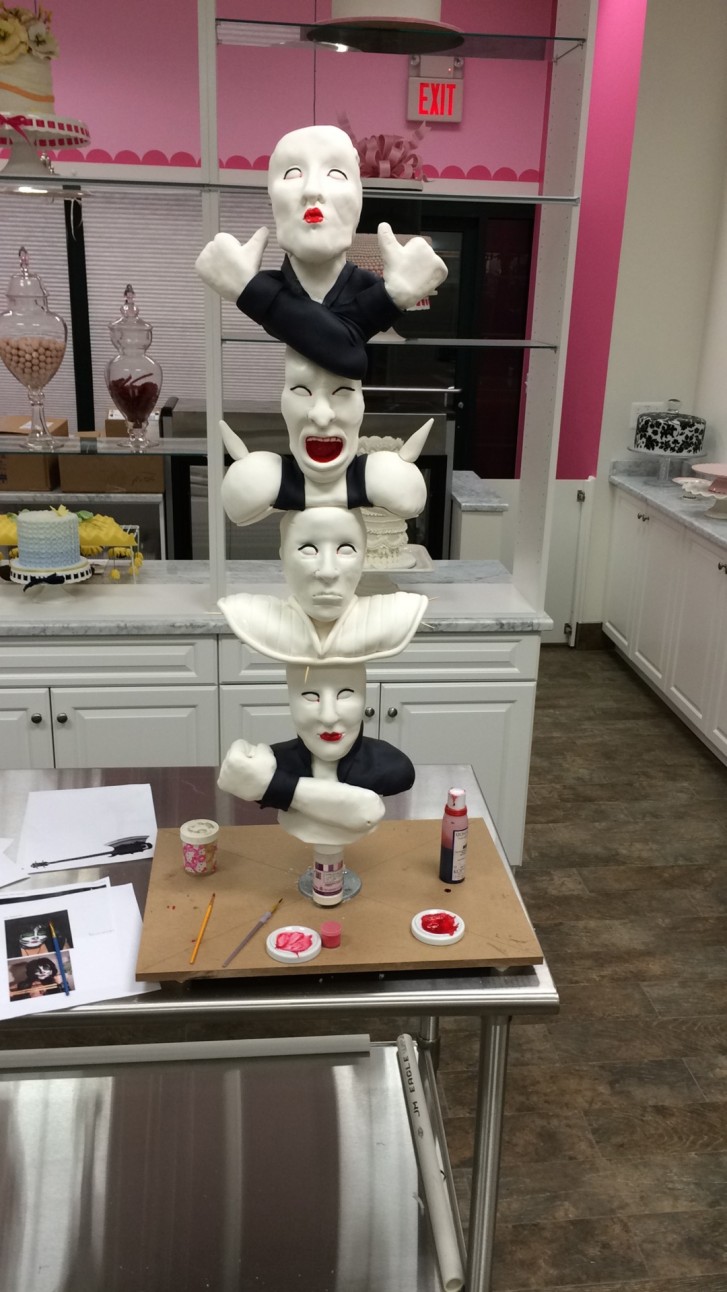 This mid-production picture shows the PVC pipe I built it on before fleshing it out all the way. LED lights were built in to the structure do it could be illuminated. I live in fear of embedding a disposable LED in some inaccessible place in a sculpture and it turning out to be a dud and not lighting up. So far, that's never happened! Digging the light out of six inches of rock hard black gum paste the day of the event to replace the light in Gene Simmon's mouth might have driven me to tears. 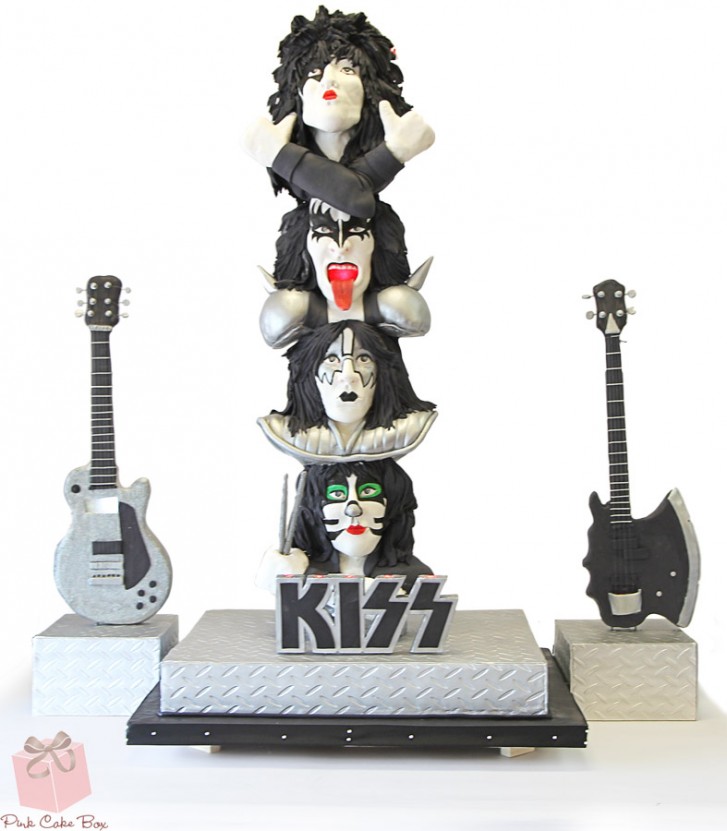 The logo lit up also, as did the guitars. I had planned to mount the guitars to the back of the totem pole, but they were so cool we decided that would hide too much of the detail we put into them. Also they were really heavy and as I was part of the team delivering and setting up this cake, we adapted.

A rabbit might not seem very extreme after the Kiss totem pole, but I love bunnies and this is one of my favorite pieces. The cake itself was a towering, complex creation. This little guy was a pet of the candy-obsessed birthday girl. Here I am looking very serious while working on Brownie the Bunny: 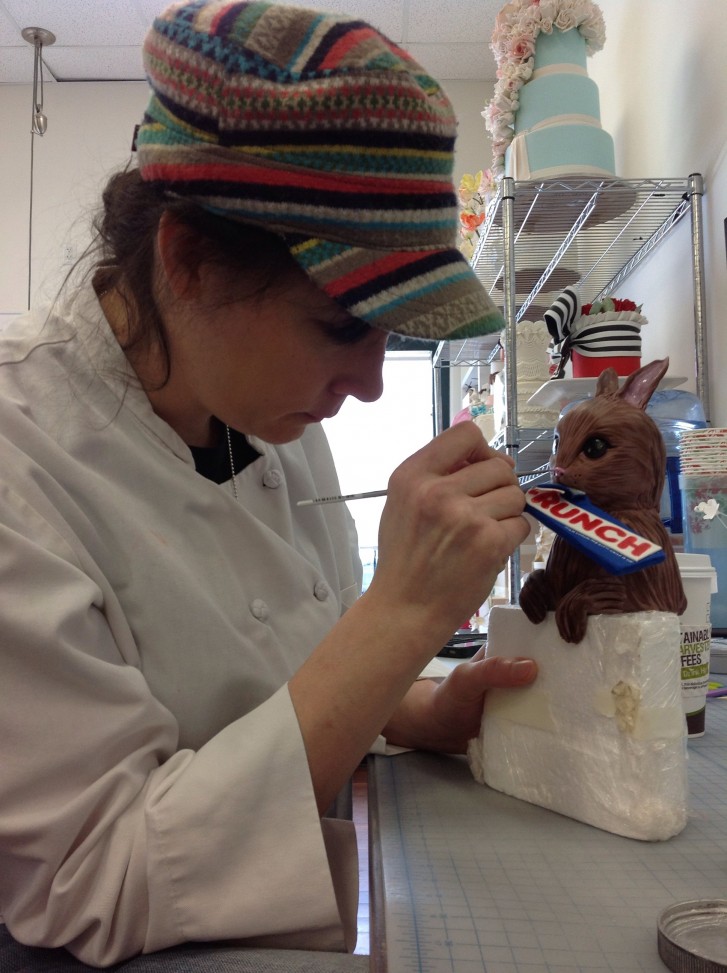 ...And Brownie complete -- I'm told he happily spit out the chocolate bar during delivery, which had to be reattached. A lesson for me as I tend to use pretty minimal amounts of tylose glue. I check that everything is securely attached now. Behind the bunny you can just see the styrofoam form for a display cake of a bull dog under a sheaf of reference pictures. 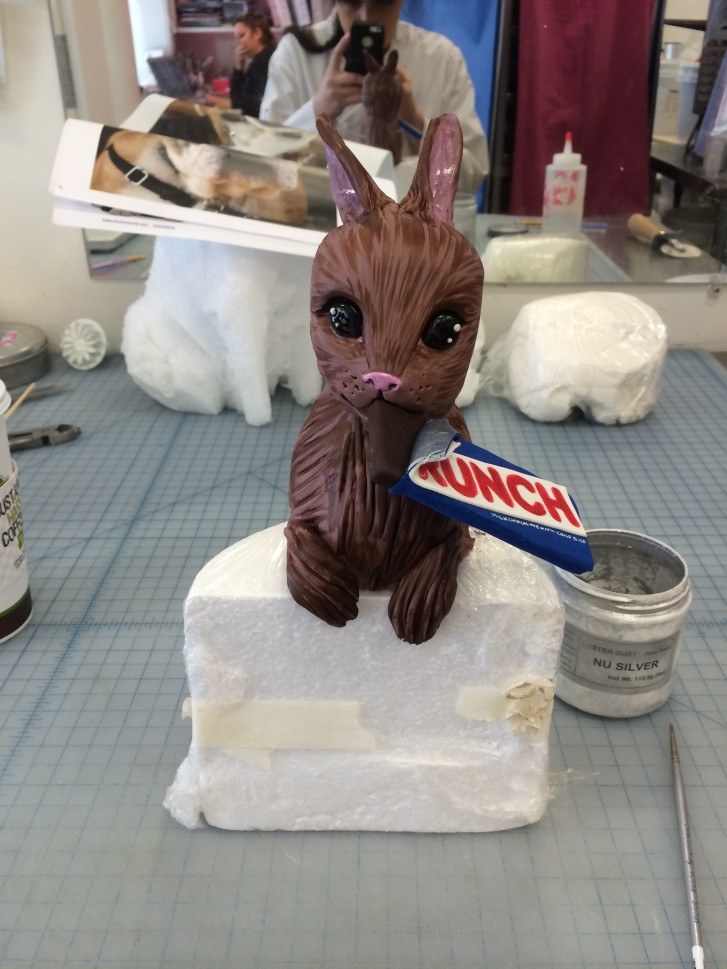 And here's the bunny atop the cake! 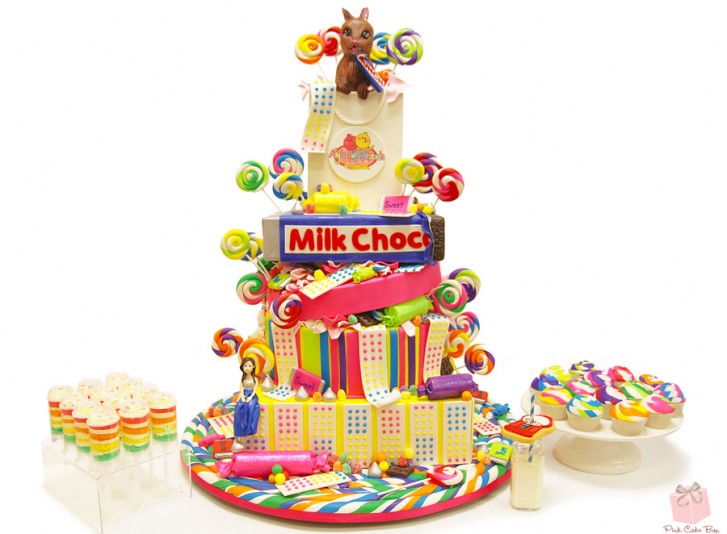 I wonder what I'll get to make next week!

One thought on “Making Extreme Figures for Cakes”

How to make a Dress Form Cake Class!

In our online Little Pink Dress Cake class you'll learn all of our secrets and techniques to create virtually any dress design! 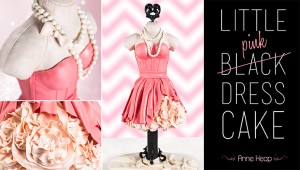