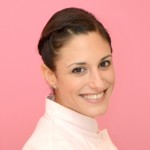 Anne Heap is the owner of Pink Cake Box, a custom cake studio that specializes in creating cakes, cupcakes & cookie favors. Anne began her career in advertising in 2001 after graduating from Boston College. Her passion for baking led her to the French Culinary Institute in 2005.

Anne and her work have been featured in numerous national magazines and television shows, including Food Network, TLC, WeTV, Bravo & CNN. Anne was recognized in 2013 by Dessert Professional as one of the top 10 cake artists in North America. Her teaching methods have been well received internationally and are now available through her DVDs and online craftsy cake topper class. Her techniques are easy to learn and will have you caking like a pro in no time!

Anne doesn't have any reviews yet! Check out our entire list of reviews here.

This quick tutorial will show you a quick and easy way to make these adorable candy cane knit cookies! Wow your guests this holiday season! Heads up!: In order to create the fondant knit patterns for this tutorial you’ll need the Rib & Cable Knit Simpress mold that is available here.

END_OF_DOCUMENT_TOKEN_TO_BE_REPLACED

In this video, Joanne does a quick demonstration on how to create an adorable rudolph cupcake using two of our knit molds – The Knit Button Mold (Medium Size) and The Classic Knit Simpress mold. You can buy our molds here!

END_OF_DOCUMENT_TOKEN_TO_BE_REPLACED

A quick video of Shannon creating a Chrysanthemum sugar flower!

END_OF_DOCUMENT_TOKEN_TO_BE_REPLACED

I shared this marble cake recipe during our second season appearance on TLC’s Ultimate Cake Challenge.

Anne doesn't have any projects yet! Check out our entire list of projects here.

We can’t take it all with us! High quality items at great prices!

END_OF_DOCUMENT_TOKEN_TO_BE_REPLACED

What?!! It’s true! There is a brand new time-saving way to create messages on cakes – Flexabets!

To be honest, I don’t like messages on cakes at all… But I know that’s not realistic when creating cakes for customers. They need Aunt Francine to know it’s her birthday! But, you know what really frustrates me?! When a beautiful cake is finished off with a sloppily piped message. Why???  Oy it’s painful to   …Continue Reading

END_OF_DOCUMENT_TOKEN_TO_BE_REPLACED

Job Description Responsibilities include managing emails, phone calls, administrative tasks, sales and customer processing. Other responsibilities include assisting in developing new partnerships and assisting in management of social media channels. Knowledge of Microsoft Office a must. Previous experience managing social media channels and Quickbooks a plus. This is a part-time position with some Saturday hours.   …Continue Reading