If you've happened across my review of the Mike McCarey Craftsy Classic Car Class you might remember me waxing poetic about how versatile I found his gelatin technique to be. Since then I’ve adopted some of my new discoveries for use here at Pink Cake Box.

We have a couple of Sugar Veil mats here which we use from time to time to make lace. But using Sugar Veil for commercial work has always been a challenge. As much as I love it, it’s moody, it has a short working time, a long setting setting time and frankly it’s not exactly affordable either if you take into account the number of times it might fail before you are able to get a usable product out of it. The shop also has technicians with a range of skill sets and experience, so again -- having a high failure rate makes it a difficult material because it is limited to certain people who have worked with it before. Because of that, I swapped it out for the flexible gelatin mixture from Mr. McCarey’s class. 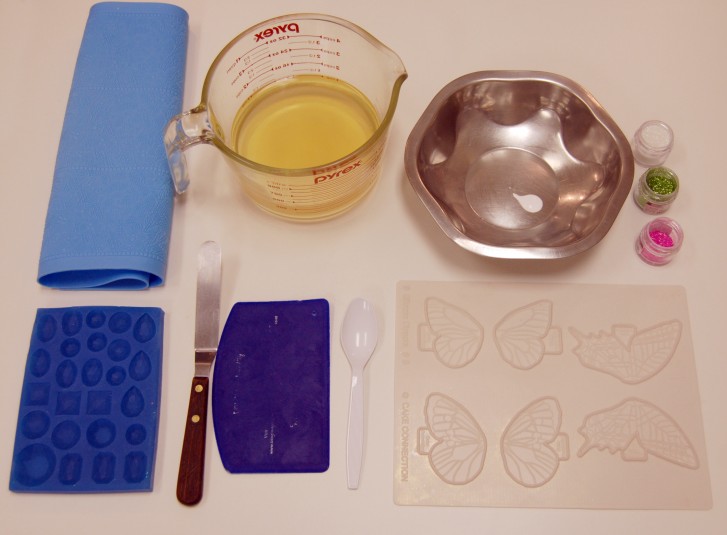 The first step was to make up a batch of gelatin -- I used the recipe exactly as described in the class. I laid out my texture mat, a pallet knife, a squeegee, and some white gel color (in a clean bowl). While the base mixture was still hot, I poured it into the bowl with the white gel color and mixed until I had a consistent color. Then I poured it out onto the mat. 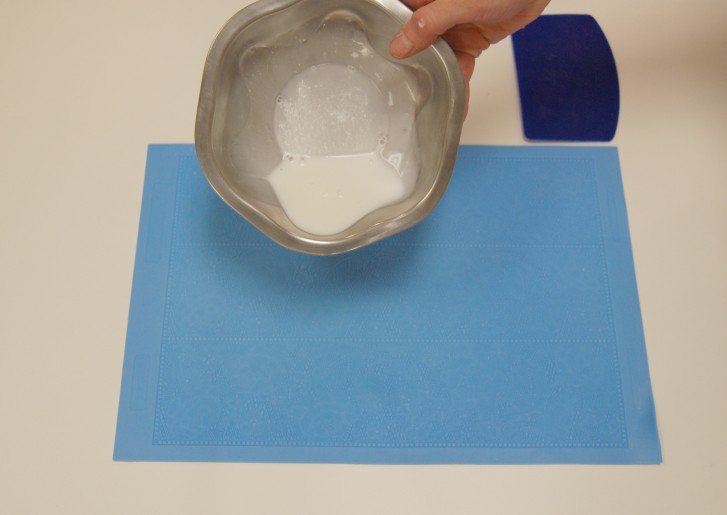 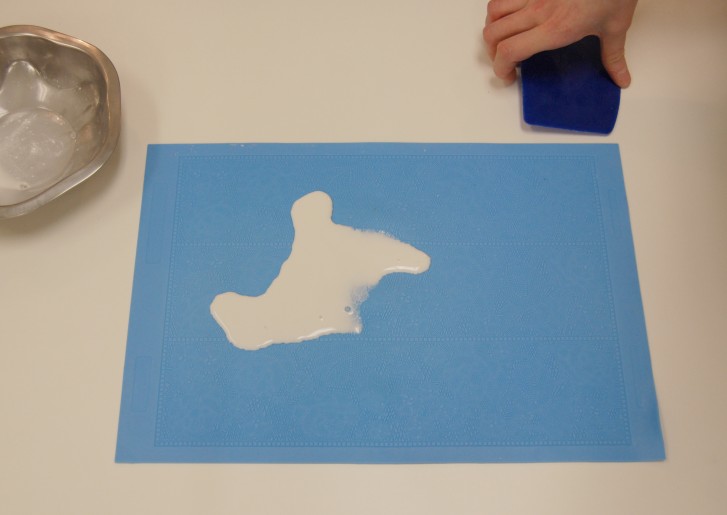 Using the squeegee I pushed the liquid mixture around in an even coat, keeping it as thin as possible while still covering the mat. 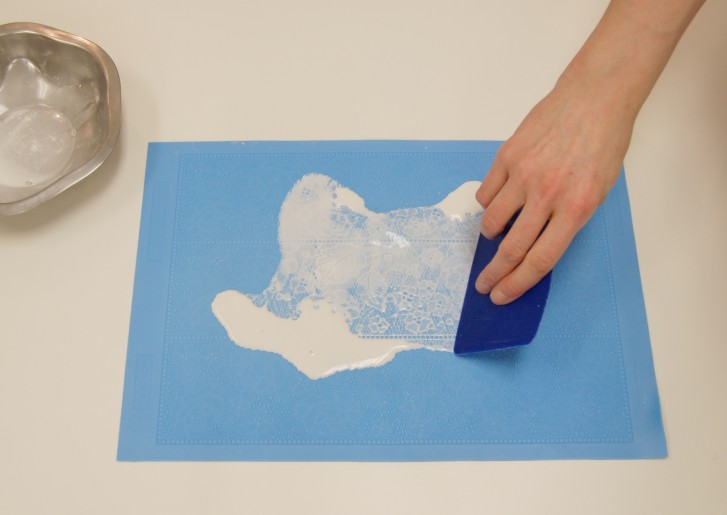 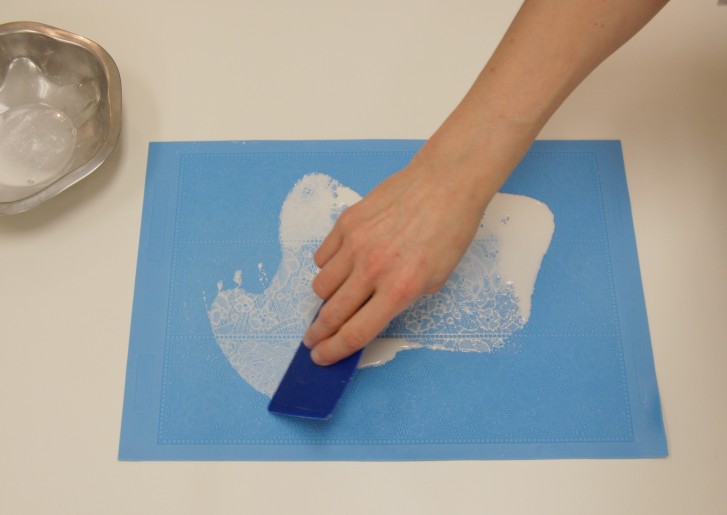 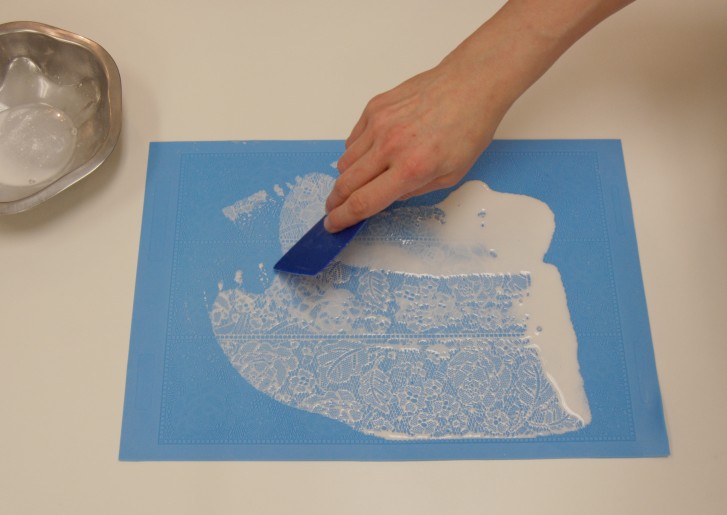 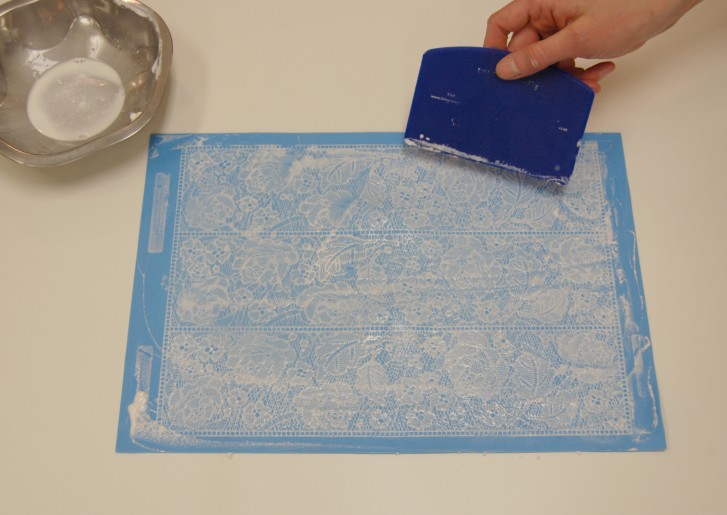 The gelatin has to set before it can be pulled off the mat. There are a few ways to do this. The most oblivious approach is to leave it alone on a level surface for three to six hours (or even overnight!). That’s a lot of waiting. Mr. McCarey suggests putting a fan on the drying gelatin in his class and that does cut down the setting time to a couple of hours. In the shop we have a dehydrator -- the type of machine used to make fruit leather and jerky -- so usually I just toss the mats in there and in less than an hour I have perfectly set sheets of edible lace! Since the dehydrator works at low heat, I assume this could be replicated in a home oven set to 200F or, if your oven has a pilot light, that might be enough. Only do this with silicone moulds and texture sheets as they are heat-safe to 350F. Many plastics give off fumes when heated, so don’t take risks!

Once set, the lace peals off with a little effort. If you have warm hands you may opt to wear latex gloves so that your body heat doesn’t melt the gelatin. 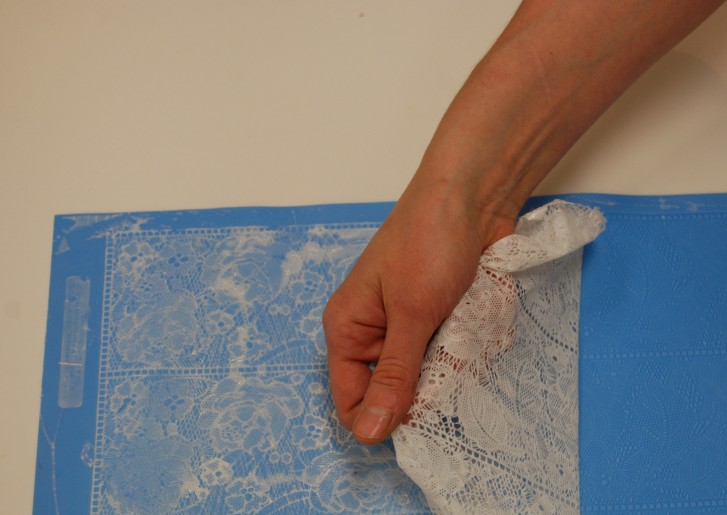 Once dry, it can be cut with scissors and is quite flexible, though still a little delicate. Sheets can be stored in ziplock bags. It will continue to dry when exposed to air and become brittle unless it has been attached to a surface. 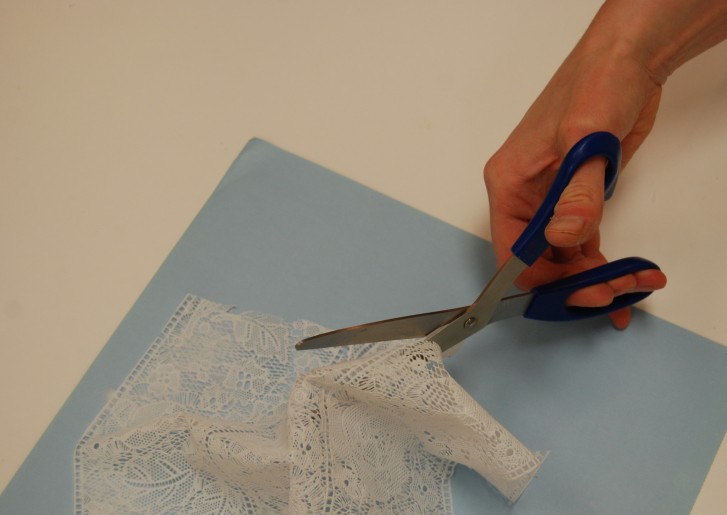 To secure it to your cake, wet the surface of the cake with a thin layer of tylose glue or piping gel and apply the lace to the fondant. It can even be attached to a buttercream tier -- simply dampen the cake with water using a paper towel or a spray bottle and press the sheet against the surface. 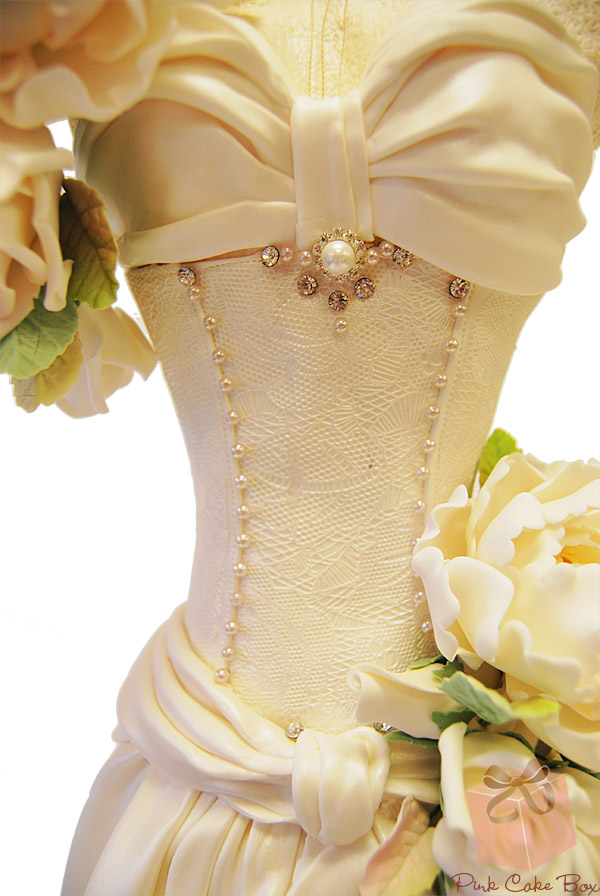 On the cake above I used the gelatin lace as an appliqué to replicate the texture of a wedding dress. (Incidentally, if you are interested in learning how to create your own dress cake, check out Anne's Craftsy Dress Class.)

The white gel color helps to give the gelatin a matte effect, so if you are planning on making it a color other than white, you may want to use powdered colors or  mix your color in with the white gel color before adding the gelatin. The other option is to add color once it is attached to the cake. This can be achieved by air brushing over top of the lace (it’s quite durable once it has been attached to a surface). Or, once the medium you have used to attache the lace is set, the lace can be brushed with a color to bring out detail. Royal icing can be piped overtop to add dimension and detail.

The other item I was quite pleased with as far as my gelatin experiments have gone so far were the butterfly wings. I picked up a silicone sheet called a “Sugar Dipper” from one of our venders a while back. I had been using it to impress gum paste as we really don’t do a lot of poured sugar here because it has some real challenges in regards to humidity, fragility, and again -- technique and experienced technicians to handle it. Like Sugar Veil it has a high failure rate which makes it difficult in a professional setting where one has a limited amount of time to complete a project. So, I have never actually used the mould for it’s intended purpose.

Of course, I decided to dump gelatin into it. 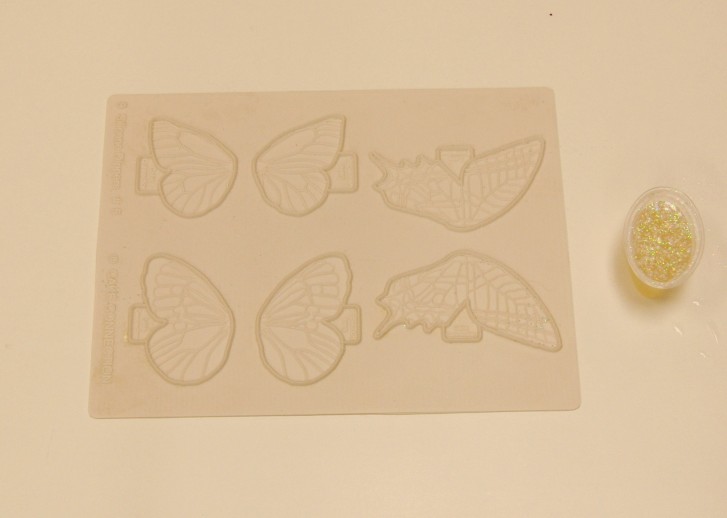 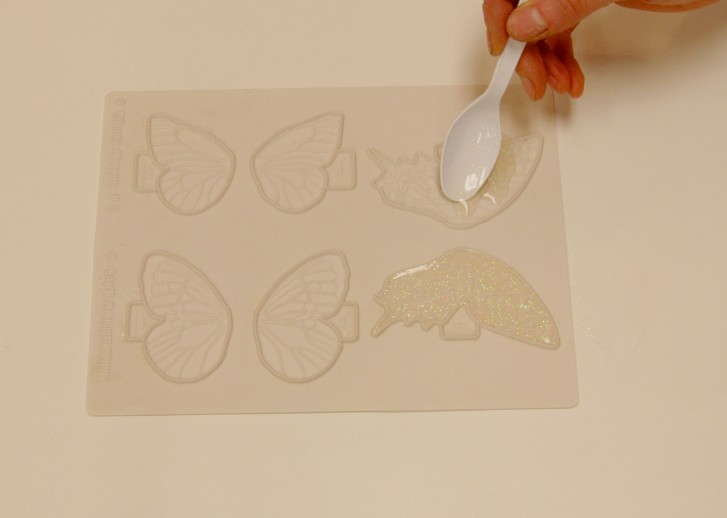 I mixed a bit of edible glitter into the mixture first, then spooned it into the moulds. As an after thought I realized it would be a better use of glitter and easier to apply if I poured the gelatin clear and sprinkled glitter over top before it set. I did exactly that with all the pours that followed.

Once filled, I put it in the dehydrator over night. Because the wings are thicker than the lace sheets they have a much longer drying time. But, since we don’t need (or want) them to be flexible, it’s less important that we pull them out of the mould in a certain time period. However, don’t touch them until you are sure they are completely dry. If they are removed from the mould too early they will curl and deform as they dry. 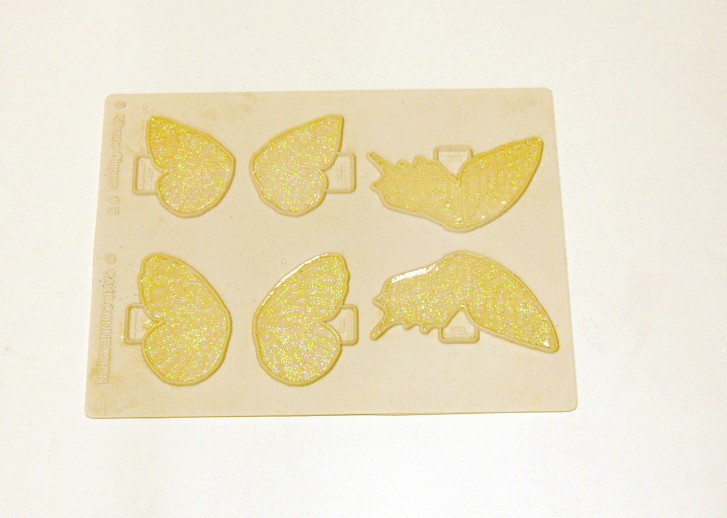 Once dry, pop them out of the mould and place them in a ziplock bag to avoid any further shrinking (and possible deformations). This will also keep them from becoming too brittle.

Before the gum paste dries, place the wing paste-side down in the mould and press carefully so that it has an impression that mirrors the texture of the gelatin. Allow to dry for at least 24 hours. Now you may detail the gum paste side of the wing! I like to brush it lightly with petal dust just enough to bring out detail. 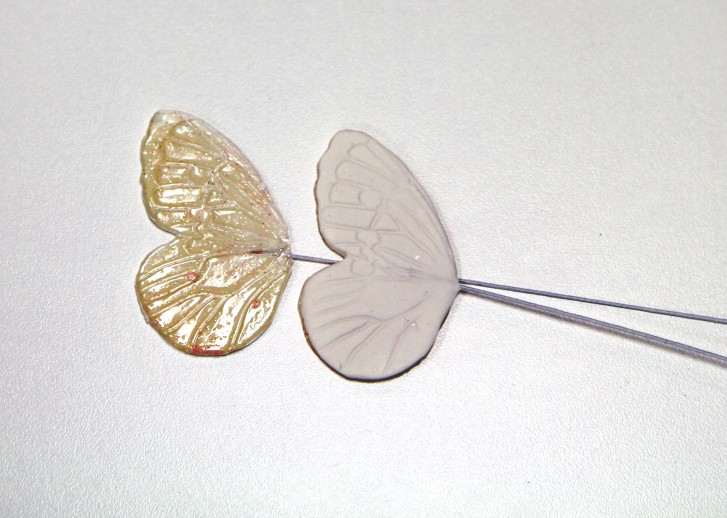 Another variation on this is to make four sets of gelatin wings per style and sandwich the gum paste and wire between them.

3 thoughts on “Experiments with Gelatin”

In our online Cake Toppers Techniques class you'll learn how to color, structure and form gum paste into a sleeping baby, a sitting boy, a sitting pregnant lady and a standing woman! 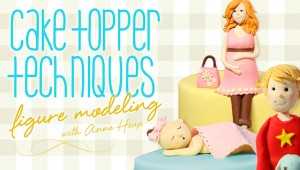